In an opening keynote speech to the European Security Conference on 20 November, German MEP Karl von Wogau (EPP-ED) called for a European White Paper on security policy focussing on key capabilities, common equipment and better spending. He said that proposals announced by France’s President Nicolas Sarkozy and the Spanish government should be taken up in a white paper containing practical measures for the implementation and the further development of the European Security Strategy, agreed by EU governments in 2003. Better spending and better decision- making were constant refrains during his speech. 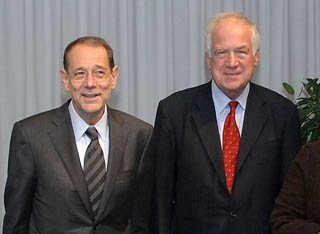 “It would be a big step forward to harmonise the equipment and the training of troops which are available for common operations under the command of the European Union, first of all the battlegroups,” said Von Wogau. Von Wogau described the situation with regard to defence spending in the EU as “European inefficiency” and said that it “is partly due to the fact that we do not have a common European defence equipment market. This leads to much unnecessary duplication of procurement programmes”. He referred to 23 parallel programmes for armoured vehicles, three parallel programmes for combat aircraft and 89 major European weapons programmes in comparison to only 27 in the United States. In short, he wants to ensure that soldiers who are sent on European missions have the right equipment, that duplication between member states is avoided and that equipment is harmonised. “The use of different and often incompatible equipment in multinational operations lowers efficiency and raises costs,” he added.

In this connection, he said that there is therefore a need for more efficiency in defence procurement and intra-Community transfers (current yearly cost estimated at €3.16 billion for 2003) and binding common rules for arms exports. He was therefore looking forward to seeing the corresponding European Commission proposals, “hopefully by the end of the year”.

Another of his main ideas is to have a common European headquarters for European Security and Defence Policy missions. He described the current [NATO] Berlin Plus and five national headquarters for multilateral operations as being “more than duplication”.

The German MEP was also critical of the fact that there are currently three parallel national systems of satellite- based intelligence (Helios, SARLupe and Cosmo Skymed) but that “the images from these systems have not been available to our common satellite centre in Torrejón”. In his view, real-time pictures, independent from weather and day time, are needed for military missions under European command as well as for humanitarian missions, natural disasters, the surveillance of the EU’s outside borders and for the observation of the EU’s critical infrastructures. “It is imperative that the next generation of these systems is a common European one,” said Von Wogau.

The chairman of the European Parliament’s Subcommittee on Security and Defence has started work on a report on the significance of space for EU security. He said that “Galileo and GMES have very important security roles” and that “they are of the highest importance for our future security”. “Autonomous access to space has become an indispensable element of sovereignty – and it can only be ensured by close European cooperation,” he added.

Von Wogau also said that there are currently five national telecommunications systems used to run multinational operations. He called for “a common basic standard for the communications systems of military, police and disaster relief services,” because a common system “would be less costly, more efficient and less risky for the personnel running these operations”.

Von Wogau also said that close cooperation between NATO and the European Union is “of the utmost importance” and that the EU’s aim is “an effective and balanced partnership with the US”. However, he said he was concerned about EU-NATO relations. “The political high-level contacts at the top are good, but I have the impression that the relationship and the cooperation at the practical level are constantly torpedoed by one single NATO member state, Turkey. We have to find a solution which ensures that political decisions can be jointly implemented,” he said.

The main threats to security

For Von Wogau, the main threats to security are the same as they were in 2003 – terrorism, weapons of mass destruction and regional conflicts:

The events in London and Madrid and several foiled attempts show that the danger is still there.

The proliferation of WMDs remains a pressing concern.

The conflicts in Africa, the tensions in the Balkans and the protracted conflicts in the Middle East all remain to be solved Furthermore, problems of the supply of energy and water remain on the agenda and are even more urgent than four years ago.