Chisinau, 19/03/2008 (EDD) - During a visit to Moldova and Ukraine from 17 to 19 March, organised at an initiative by the chairman of the European Parliament’s sub-committee on security and defence, Karl von Wogau (EPP-ED, Germany), EDD and other European journalists were able to take stock of the work done by the European Border Assistance Mission (EUBAM) at the border between Moldova and Ukraine, which has now entered its third year of operations. Ioan Mircea Pascu (PES), former Defence Minister for Romania and Deputy Chairman of the EP foreign affairs committee also took part in the visit. Since 2005, the members of the mission have assisted Moldovan and Ukrainian border police, customs agents and border guards in order to secure the joint border between the two countries and make it more watertight (1,200 km, of which over 400 km is the border between the self-proclaimed Republic of Transnistria and Ukraine, are not de facto under the authority of Chisinau). With a budget of €12.2 million, EUBAM carries out a broad range of actions to contribute to the setting up of a true border management system. This requires not only technical means but above all a change of mentality, trust between Moldovans and Ukrainians, constant cooperation with the OSCE which has the right to control Transnistrian territory (EUBAM’s mandate prohibits it from any direct contact with the Transnistrian authorities), as well as contact at political level with the delegation of the European Commission and the EU Special Representative for Moldova.

The mission’s mandate covers action ranging from the building of infrastructure at the border to the training of customs officers. During this year, the mission is due to focus on: - strengthening inspection capacities at official border crossing points between Moldova and Ukraine; - and continued setting in place of a control system based on risk analysis. In the port of Odessa (Ukraine’s largest port serving 75% of the country’s maritime transport), where EUBAM has set up one of its six regional offices, the aim is to replace the former inspection system, which controlled all cargo vessels entering the port, by a system targeting high-risk vessels. This method has already proven successful. In 2007, for the first time in 4 years, Ukrainian customs services intercepted 4 large consignments of hard drugs (cocaine and heroin). Two other large drug consignments were seized during the first quarter of 2008.

European assistance is also useful when it comes to launching research, and teaching customs officers to recognise forged documents (visas, passports, customs certificates). The mission must also help to set in place the instruments needed to ensure integrated border management, allowing all services concerned to be coordinated. This is effective for combating tax fraud. Other priorities of the mission for this year include the fight against corruption and restoring confidence between Moldovan and Ukrainian services, as well as heightening public and customs awareness of recurrent problems with regard to the unlawful smuggling of goods and cigarettes. One of the training courses initiated at the beginning of the year consists in teaching public relations techniques to customs agents in Ukraine and Moldova. Furthermore, the mission monitors respect of the joint statement (December 2005) between Moldova and Ukraine, allowing access by Transnistrian businesses to the Ukrainian market to be regularised. The declaration stipulates that Ukraine will receive businesses from Transnistria on condition that they have tax stamps from Moldova. The declaration, which was long boycotted by Transnistrian businesses, began to bear fruit in 2006. Currently, 400 Transnistrian businesses have joined the new scheme. After the region’s breakaway tendencies, Moldovan inspectors were no longer authorised to control the border between the region and Ukraine. This resulted in over 400 km of common border only being controlled by Ukrainian customs officials. With several crossing points escaping all control, the border gained favour with smugglers, resulting in major losses for the Ukrainian and Moldovan budgets. For example, in autumn 2006, joint actions led to the discovery of very large quantities of meat imported from Ukraine to Transnistria (in six months, customs detected over 40,000 tonnes of chicken meat sold in Transnistria). Profits from this fraudulent operation represent the equivalent of €750 per day for each tonne of meat smuggled into the country, at a loss of over €40 million for the Ukrainian budget. The mission has not disclosed any unlawful arms trafficking except for a few munitions and hunting guns (616 in total in 2006). No one would deny, however, that such smuggling is going on. At present, there are 11 weapons factories (mortars, Kalashnikovs, missile launchers, grenade launchers) on Transnistrian soil, one of the USSR defence industry’s main production areas. A military base is also still located near Tiraspol and 1,200 Russian troops ensure security of the region (about half of them responsible for surveillance of the munitions depot). Despite free movement on Transnistrian territory enjoyed by the OSCE under the memorandum of agreement negotiated with Transnistrian authorities, its inspectors have not been able to control the suspect sites. Neither are members of the mission now authorised to circulate near Russian military bases. Several indications points to there being an arms trade – to start with, the proximity of arms transport routes. In 2002, the Transnistrian authorities did not agree to allow the two munitions destruction missions prepared by the OSCE on their territory and stopped all destruction of arms stockpiles after withdrawal of the 14th Russian army. Another outstanding issue is that of the 17 Igla transportable rocket launchers, lost during withdrawal of the Russian forces.

At the present time, the EUBAM mission is divided into six regional offices, each with its own area of responsibility. These are: Otaci at the northern border between Moldova and Ukraine, in the port of Odessa, Basarabeasca in Moldova, and Kuchurhan and Kotovsk, as well as Chisinau (the capital of Moldova) and a headquarters in Odessa. Those in charge of the regional offices must, on a daily basis, help to control borders and coordinate the work of border guards from both states. From the Kuchurhan offices, which we were able to visit on 18 March, the EUBAM team (11 from the EU, one Ukrainian, 8 locally employed personnel and 2 cars) headed by Jean Pierre Arbarilli of France, covers 230 km of Moldovan-Ukrainian border and 75 km of the joint segment of the Transnistrian border. The team together identified (after several trilateral meetings with Moldovan and Ukrainian border guards) five points to which they dedicate 80% of their time. These are the border crossing at Kuchurhan (the most important crossing point for rail and road), a border control point in Majaki/Palanca/Udobe, a segment limited by the towns of Toudor–Sarozache and the customs point at Rozdil’na. On the Moldovan side, there is also a general directorate for Moldovan customs in Stera voda, and customs points in Causemi and Bihorod-Dnievstrovski. The zone comes under the surveillance of two detachments of Ukrainian border guards and Ukrainian customs agents and, on the Moldovan side, a border guard detachment and Moldovan customs officials. In theory, the green border must be controlled by joint patrols, but both parties still have difficulty in doing so on a regular basis given their lack of mutual confidence. Conditions on the ground are sometimes difficult. In the Otaci offices, the personnel suffers from a constant lack of water, and, in Kuchurhan, internet connections are lacking. In Kuchurhan, a risk analysis unit has recently been set up. The EUBAM team is currently preparing an awareness and information campaign with the help of the local Moldovan press. The Ukrainian press is invited to take part. 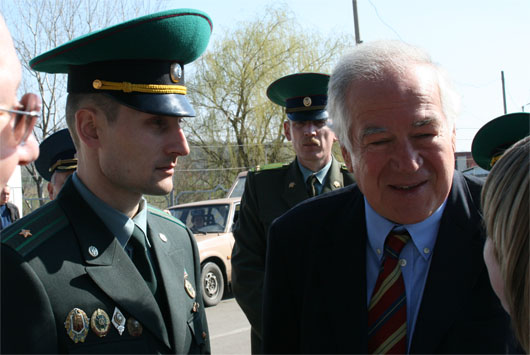