Our common effort made it a success. This success is also due to the fact that we have become over the years a group of friends from different political families but with common goals.

Let me say a few words about what we are and where we want to go.

First of all, what is the Kangaroo Group. Who are we.

Some time ago, I heard the opinion that the Kangaroo Group is the most successful European lobby group ever - since it was instrumental in bringing about the internal market and the common currency.

I think that this notion is not a valid description of what we are.

A lobby is normally a group that fosters a special interest of a particular group of businesses or people.

The goals of the Kangaroo Group have always been goals of general interest.

A European Home Market and a strong common currency are not special interests of a limited group of people.

They are instruments to foster competition at a continental level and to make Europe more competitive.

Experience shows that this is the best way to foster wealth and employment. This is certainly in the interest of all the citizens of Europe.

They have also been a powerful instrument against red tape.

We should not forget the millions of customs documents which have become obsolete by the internal market. This is certainly in the interest of all businesses and consumers.

They are also one of the answers to the challenges of globalization.

Europe disposes of the legal instruments to work towards a common framework of rules within a Home Market of 5oo million citizens.

If you want to have a level playing field, you must have the power to set common rules.

This power exists at the European level. It does not at the global level.

And such an answer is certainly in the interest of all the citizens of the European Union.

Another key to our success is our working method.

In our meetings and working groups we endeavour to make sure that all the stakeholders are present and have an opportunity to express themselves. Speakers from the European Parliament and its different political groups, Representatives of Council, Commission and the European Court of Justice and last not least representatives of the business community.

This helps us to arrive at useful and feasible solutions.

Very often you will find that the Parliaments Rapporteur is a member of the Kangaroo Group. Sometimes also the responsible Member of the Commission.

We can say that all the key reports concerning Economic and Monetary Union were made by members of the Kangaroo Group.

A third feature of the Kangaroo Group is the fact that we consider Projects to be more important than Institutions.

We therefore always concentrated on the most important Projects which fulfilled two conditions:

What does that mean for our next steps? Which should be the next jumps of the Kangaroo?

Back in 1987, when the Single Act was adopted, the political drive was to complete the single market by 1993.

We became the “Movement for free Movement” working for the completion of the European Home Market.

Since then, people have come to realise that the single market is not static:

it is not something that can be finished on a particular date and then put in a museum. It is a dynamic process for managing the Regulatory Framework in the European Union and the MemberStates so as to guarantee that the “four freedoms” are maintained.

Challenges to the four freedoms may come in many guises.

Member States may want to restrict the free movement of people in order to protect people from terrorism or organized crime.

Member states may want to restrict the free movement of goods in order to protect the environment or public health.

Member States may want to restrict the free movement of services in order to protect consumers.

These are all legitimate public policy objectives: and preserving the single market should not stand in the way of measures to ensure people’s security, or to protect the environment or public health. Rather, the need to preserve the single market requires that such issues be addressed by mutual recognition. If this is not possible, solutions have to be found at the European level.

Therefore, we have to be the watchdog for the Single Market. We have to start to bark where there is a danger that it breaks up or that things are moving backwards.

We have to continue to work at its realization where a European Home Market does not yet exist, for example in

These are parts of our economy where important obstacles to free movement remain.

But we should also look out for the next big projects of the European Union.

I believe that the next big task where the European Union has to play its role is the field of Security.

We have opened the borders between most of the member countries of the European Union. The controls that in the past took place at the borders of our nation states have been moved to our common outside borders. These controls have to be as effective as possible in order to protect us against terrorism, organized crime, drug smuggling and illegal immigration. But at the same time we have to make sure that our borders remain as open as possible for trade and for people living in the border regions. We will not become a fortress Europe.

We must also protect our critical infrastructures: Power stations, airports, pipelines, train stations and telecommunication systems. The events in London and in Madrid have shown that terrorist attacks can also happen in Europe.

Last and not least, we have to take a look at the efficiency of our defence systems. The wars on the Balkans have shown that civil wars can still happen in Europe. When peace was restored on the Balkans, our American friends told us that we spend half of what they spend on Defence, but that the efficiency of our contribution was at about ten percent.

The 27 member states of the Union have almost two million soldiers, 10 000 tanks and 3 000 combat aircraft. This sounds like an impressive armada. But recently we have seen that it was almost impossible to send an additional battalion to protect the fugitive camps in Tschad. We have three different systems of satellite based intelligence, five different systems of satellite based protected telecommunications and more than 20 different types of armoured vehicles. If we add the defence budgets of the 27 member states we find that we spend about 170 billion Euro per year on defence but the examples I give above show that we spend them in a suboptimal way.

This is why the board presents to you the resolution demanding that one of our next steps should be to develop into a Security and Defence Union.

This corresponds to a recurrent theme of the Kangaroo Group:

To spend the money of the tax payer as efficiently as possible.

It also corresponds to the wishes of the citizens of Europe. Opinion polls show that more than 70% of them consider that Europe should be more involved in matters of Security and Defence.

As always, the Kangaroo group takes the step by step approach.

The Kangaroo group has always been at the vanguard of new developments in the European Union.

We should continue on this way and make Security and Defence one of our priorities for the coming years.

We will continue to be the movement for free movement.

We will continue to be the watchdog for the single market.

We will continue to go step by step.

And we will join two fundamental goals: Free movement and Security.

By the end of this year, the borders to the new member states in the East will be opened in the context of the Schengen agreement. When the Kangaroo Group started to work for open borders in 1979 we did certainly not imagine that this would one day also include the border at Oder and Neisse. I think we should have a special celebration at this event. Similar to the celebrations we had in Schengen and in Basle at earlier occasions. Because these open borders will also be a success of the Kangaroo Group. 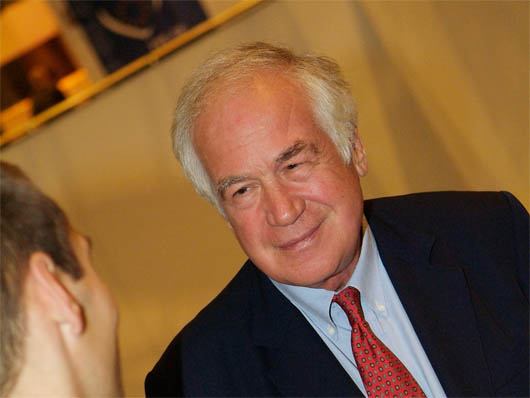